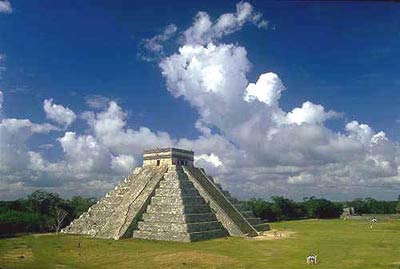 This is a picture of a pyramid in Mexico located at Chichen Itza. Notice the stairs going all the way up to the top. History TV shows tell us that these pyramids were constructed to make sacrifices on the top of the pyramid. The sacrifices were to the Gods to bring rain or crops or other things. Here is another picture of it, notice how massive this pyramid is. 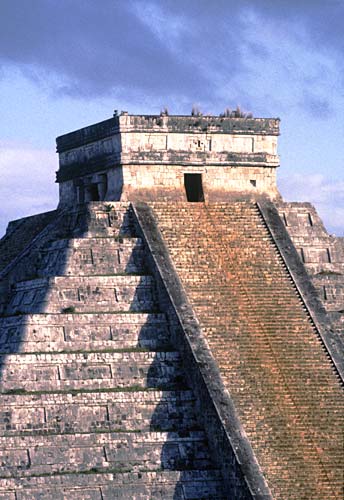 Just look at all the stairs. Are we really to believe that such an advanced construction as this pyramid was just for making sacrifices. This pyramid is extremely well built. It just doesn't make sense of going through extremely immense construction projects for the sole purpose of making sacrifices. They could have gone to the top of a mountain or a cliff for making sacrificies, why go to so much trouble? The answer is simple, it wasn't initially build for that reason. I think it was build for landing ufo's on the top. The aliens could then go down the stairs to the ground. The top of the pyramid is easily big enough to land a craft. One good reason I think aliens were involved, is the other amazing technology of echoes that is used at this site.

If you stand at a certain distance between this pyramid and another structure and clap you will hear the sound of a bird that is found in these parts. In other words they precisely measured the distance of both structures so that when you clap at a certain location you hear a distinct bird call. To calibrate such an echo sound is absolutely unheard of for an ancient civilization, no massive structures of our times even comes close to such a feat. This pyramid is named for a bird, the same bird you hear when you clap between both structures. Done on purpose to illustrate their advanced knowledge. I have visited these pyramids and at first glance my first thought is how big it was, a great landing spot for a ufo, what other logical purpose could they have.