Each page of this section contains information on anti gravity devices or machines that are currently in use or being tested. 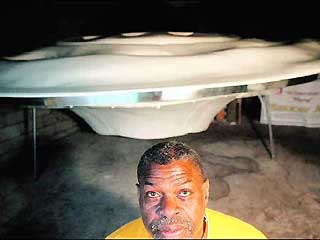 CLINTON TOWNSHIP, Michigan. — Call him crazy, but Alfie Carrington has spent half his life building a flying saucer.

The construction worker spends his free time inside a rented storage garage in Clinton Township, Mich., where he broods over a 14-foot-wide, carbon fiber, fiberglass vessel.

Thirty years ago, when Carrington was 27 and obsessed with science fiction, he set out to build a UFO look-alike. Despite his lack of engineering experience, Carrington pored over books, magazines and studies about aviation and spent nearly $60,000 for some of the materials needed for this saucer.

Carrington does it because he believes he has discovered a simple design for an aircraft that aeronautical engineers have spent countless millions trying to build.

Carrington has two patents on the design and a company called Vertex Aerospace. His work caught the attention of NASA, which invited him to a conference in the mid-1990s where engineers scratched their heads when he confessed he knew nothing about computers.

His own version of Anti Gravity Technology Propulsion: His idea is to fire up the vessel with a rotary engine to stimulate a magnetic levitation system to rotate the ship's two discs. The discs would draw air into propeller blades.

"It's a simple concept," Carrington said. "There is no way this thing can't get off the ground because 40 percent of it is rotating."

"Things spinning at those speeds are worrisome because of the stress from centrifugal force," explained Cornelis van Dam, professor of mechanical and aeronautical engineering at the University of California-Davis, a leading aviation school. "If it's not properly designed and built, it will rip itself apart. I wouldn't want to stand next to it when it gets up to speed."

Even aerospace experts rely on other professionals to build such complex vessels, van Dam pointed out.

But Carrington doesn't have time for naysayers. In eight months, he hopes to launch his dream, assuming he can raise at least another $40,000 to complete the project.