April 6, 1999: The ion propulsion system on Deep Space 1 is the culmination of over 50 years of development on electric engine systems in space. Launched on Oct. 24, 1998, Deep Space 1 will be the first spacecraft to actually use ion propulsion to reach another planetary body.

The engineering that makes this possible represents a journey that started more than half a century ago, when modern rocketry was invented. Looking back, Ernst Stuhlinger, a world expert on electric propulsion, said that the technology "owed its life-giving spark to Wernher von Braun." 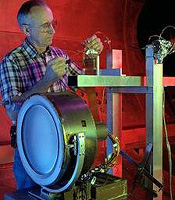 December 2: What next, Leonids?

November 30: Learning how to make a clean sweep in space

Dr. Wernher von Braun, a rocket scientist from Germany, was first introduced to the possibility of electric propulsion in the 1930s, through his mentor, Dr. Hermann Oberth. But von Braun started his career working on chemical propulsion systems.
Below: An artist's concept depicts the Deep Space 1 probe with its ion engine operating at full thrust.

In 1932, the German Army's Ordnance Department provided him with a research grant to test small liquid-fueled rocket engines at the Kummersdorf Proving Grounds near Berlin. During World War II, he and a team of German rocket experts developed the V-2 rocket, a14.4-meter (47-ft) high missile that burned liquid oxygen with alcohol (made from fermented potatoes).
In 1948, the orginal "German Rocket Team" posed for a group portrait at Fort Bliss, Texas. Dr. Ernst Stuhlinger is circled to the left of center. Dr. Wernher von Braun is circled at right. Two years later, they relocated to Huntsville, Ala.
At the end of WWII in 1945, von Braun and hundreds of other German rocket experts surrendered to the Americans. They were sent to Fort Bliss, Texas, to develop rocket technology for U.S. Army research. While von Braun and his team continued to work on the V-2 rocket at Fort Bliss, von Braun dreamed about developing a rocket that could travel to other planets.
With that thought in mind, he approached Ernst Stuhlinger, a member of the original "Rocket Team" that had emigrated to Fort Bliss. Von Braun asked Stuhlinger to review the research by von Braun's mentor, Oberth.
"Professor Oberth has been right with so many of his early proposals," von Braun told Stuhlinger in 1947, "I wouldn't be a bit surprised if we flew to Mars electrically."
Stuhlinger immersed himself in electric propulsion theory. He found a copy of Oberth's book, "Possibilities of Space Flight." Published in 1939, Oberth devoted a chapter to the various problems of electric propulsion systems, envisioning one design that might carry a 150-ton payload. In studying the origins of interest in electric propulsion, Stuhlinger learned that the American rocket pioneer, Dr. Robert Goddard, had examined the subject as early as 1906. Goddard had mentioned the possibility of accelerating electrically charged particles to very high velocities without the need for high temperatures.
Studies in electric propulsion became more frequent following WWII, and in 1955 Stuhlinger presented a paper at the International Astronautical Congress in Vienna entitled, "Possibilities of Electrical Space Ship Propulsion." During his presentation, Stuhlinger discussed a proposal made by von Braun two years earlier, to use chemical propulsion to send a spaceship to Mars. In von Braun's proposal, Stuhlinger noted that the ratio of take-off weight to final weight after propellant consumption was 25-to-1. Stuhlinger argued that lighter-weight electric propulsion systems would make such planetary trips more feasible than they were with chemical propulsion.