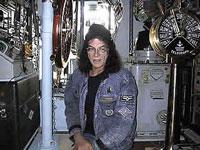 Here is a picture of John Hutchison in his apartment/workshop.

Here is another picture of John, you can see a little bit more of the machinery in his workshop. John lives in Vancouver B.C. He has done presentations for several members of the Government and many other important scientists.

The following 2 videos are from Google Video. When you click on the link it will open up a new window.

Here is a video of John Hutchison showcasing the anti gravity Hutchison Effect.

The Hutchison Effect is what happens when John turns on some of his machinery, he creates radio wave interferences in a zone of spatial volume encompassed by high voltage sources, usually a Van de Graff generator, and two or more Tesla coils.

The effects produced include levitation of heavy objects, fusion of dissimilar materials such as metal and wood (exactly as portrayed in the movie, "The Philadelphia Experiment"), the anomalous heating of metals without burning adjacent material, spontaneous fracturing of metals (which separate by sliding in a sideways fashion), and both temporary and permanent changes in the crystalline structure and physical properties of metals. The levitation of heavy objects by the Hutchison Effect is not---repeat not---the result of simple electrostatic or electromagnetic levitation.

Claims that these forces alone can explain the phenomenon are patently ridiculous, and easily disproved by merely trying to use such methods to duplicate what the Hutchison Effect has achieved, which has been well documented both on film and videotape, and has been witnessed many times by numerous credentialed scientists and engineers. Challengers should note that their apparatus must be limited to the use of 75 Watts of power from a 120 Volt AC outlet, as that is all that is used by Hutchison's apparatus to levitate a 60-pound cannon ball.

It is surmised by some researchers that what Hutchison has done is tap into the Zero Point Energy. This energy gets its name from the fact that it is evidenced by oscillations at zero degrees Kelvin, where supposedly all activity in an atom ceases. The energy is associated with the spontaneous emission and annihilation of electrons and positrons coming from what is called "the quantum vacuum." The density of the energy contained in the quantum vacuum is estimated by some at ten to the thirteenth Joules per cubic centimeter, which is reportedly sufficient to boil off the Earth's oceans in a matter of moments. Given access to such energies, it is small wonder that the Hutchison Effect produces such bizarre phenomena. At the present time, the phenomena are difficult to reproduce with any regularity. The focus for the future, then, is first to increase the frequency of occurence of the effects, then to achieve some degree of precision in their control. The work is continuing at this time. Before long, we shall see what progress can be made.

Here is the disappointing part of John Hutchison's research. Many different devices are used together to produce the anti gravity effect where objects levitate. John doesn't succeed every time to levitate objects. He has not mastered control of this phenomena. And it has been several years since he has discovered this effect. Another major roadblock to his research is that his machinery weighs several tons, and he can't move it out of his apartment. The reason why he has to move it is because when he conducts experiments it affects the neighbors in several ways. Their appliances don't work, their lights go on and off and things of that nature. So until he can move out and conduct more tests we will have to wait and see if he can master control of the Hutchison Effect.

John has also succesfully built a free energy battery. Here is a picture of it. Using this battery someone can get power for an electrical device without the use of conventional batteries, John's battery will never deplete it's energy. 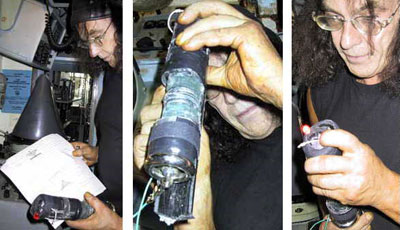