Edward Leedskalnin is the creator of Coral Castle. What is Coral Castle? It is a museum of sorts that has huge stone sculptures. Edward Leedskalnin laboured for over 28 years to build a monument to his lost love. He was a very compassionate man. Edward moved over 1 100 tons of stone on his own. He claimed to know how the Egyptians built the pyramids and moved the stones from place to place. 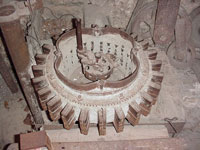 Here is a picture of Edward Leedskalnin's device that he used to move the gigantic coral stones from place to place. This apparatus uses magnets. Ed knew the secret of magnetic currents. He often said that modern science doesn't really know how magnetic currents work. 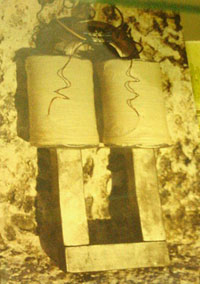 Here is another picture of one of Edward Leedskalnin's magnetic devices. This device also deals with magnets and magnetic current. 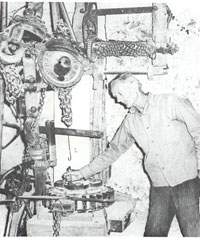 Here is a picture of the device that many people think Edward Leedskalnin used to move his stone scultpures.This device is used along with his magnetic wheel.

This is a picture of some of the stone sculptures that Ed built at Coral Castle.

Edward also wrote a book about Magnetic Current, in this book he explains in somewhat technical terms how magnet currents really work. He says that science has it all wrong. His ideas are great, I recommend this book. The original book cover is below, notice the symbol of two curved lines, many people believe this symbol to be important in deciphering his magnetic current theories. 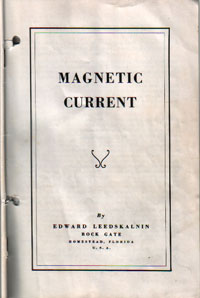