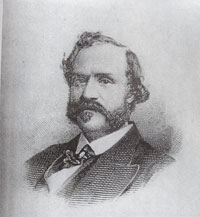 John Keely was probably the best inventor of all times in my opinion. Nikola Tesla was probably second to John in my view. John Keely got to the very heart of how things work. He understood the nature of vibration. All things vibrate whether it be a rock, a mirror, a person, or a musical chord. He understood how to manipulate objects via their vibratory rates. He did this through sympathetic vibration, he also did other amazing things too which didn't only employ sympathetic vibration. 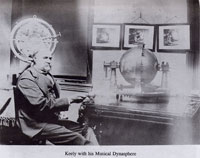 Here is another picture of John Keely, in this picture you see him alongside one of his inventions called the Musical Dynasphere.

And now I present to you some of the most amazing anti-gravity inventions ever made by John Worrell Keely. 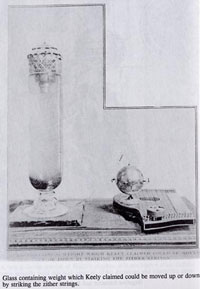 This is a picture of a glass cylinder filled with water in which is placed a weight. John attached a wire to the cylinder which is also attached to a small sphere and a string musical instrument. When John would strike the zither string the weight would lose it's weight and it would float up to the top. He could also make the heavy object regain it's weight, he therefore had complete control of the weight within the glass container.

So how exactly did this device work? Well the wire which went from the musical instrument to the glass cylinder actually changed the vibratory rate of the weight within the water. When the zither string was struck it would send a vibration through the wire to the inside of the cylinder. John Keely has said repeatedly in his writings that every object has a mass chord. Or a vibration if you will that is unique to each object. He thereby negated some of the vibrations in the weight that made the weight heavy. He did this through sympathetic vibrations. The sound from the musical instrument made the wire vibrate which in turn struck a chord with the weight. John knew how to affect the weight of an object by simply striking the right notes on the instrument.

John Keely also did the same type of experiment but with different machinery, hence the Liberator. 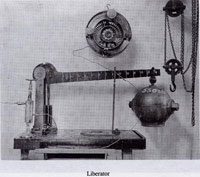 Here is a picture of another one of his successful machines. The Liberator. The Liberator when activated could render heavy objects absolutely weightless. As you can see in this picture there is a heavy weight. John could make this weight weightless simply by harnessing the power of the etheric vapour which was stored and used with his liberator and other devices which were stored on his person. He did so with a series of gold, silver, copper, and platinum wires. At one time he did a demonstration for a group of people. They were amazed to see him move a 500 horsepower vibratory engine from one end of the room to the other all on his own without even scratching the floor. The people who were there knew that this was not possible without the use of a crane or derrick. Since the engine he transported across the room was so very heavy. This was only one of many anti-gravity demonstrations that he made for some priviledged few of the public.

John was quoted as saying that his Liberator machine would release an etheric vapor which he then vitalized and stored for use in the various machines that he built. This etheric vapor had immense power and was created or harnessed if you will using the Liberator. It was written in newspapers that he had harnessed a new force of nature.

There is a very complete book on John Worrell Keely and his inventions. It is called John Keely-Free Energy Pioneer. In it you will find lots of great pictures of his inventions and also lots of information on what they did. You will also learn about the man himself. This book is well worth the small price, a must have for anyone interested in free energy and anti gravity technology.

You will find more pictures of all his inventions on the next page, just click here.